You guys are getting the raw side of me this week I guess.

Wise One, I mention her quite a bit because she’s like my mini me. She’s going through a rough time with going back to school. It’s not the normal trials and tribulations, but deeper issues that I never knew until today.

As I mentioned, Wise One was diagnosed with depression at the age of 9 shortly after her dad and I split. It was an abusive situation I left, and we all tried to deal it with as best as we could. As time went on, the bullying began as she transitioned into middle school. We moved, and the bullying got worse. I had her in therapy for a very long time, and we still go now. Bullying has been going on with her since I can remember, and it finally stopped once we relocated where we are now and she’s in high school.

The scars are still there. She was hospitalized for cutting once, and I can happily say she’s isn’t in that dark place anymore, but the social anxiety that was added on, and depression is still there. Today is no different. Today we try to work through the anxiety of going back to school. The judgment of the other girls in gym class because she chooses not to shave her legs. The judgment from some that she doesn’t act like a girl, or dress like one. The worry of gossiping, and her new support system that she has found in school nowhere to be found due to different class schedules. She tries hard like a trooper, but I won’t be surprised if I have to go to sit at the school with her tomorrow.

Of course I want to just shield her from societies assumptions of what a girl should be, and that she should suck it up, but I can’t. I do work with her to make her feel confident. She wants more guy clothing, dye and shorter hair. I say cool let’s do it. She’s an artist, and artist express themselves through their clothing, hair, and everything in between. Her talent is flawless. She’s been drawing since she was 2, and now can free hand like no one I’ve ever seen. She’s planning on going to college for cartoon animation. Her dream is to visit Japan, London, and had her own cartoon on television on day. 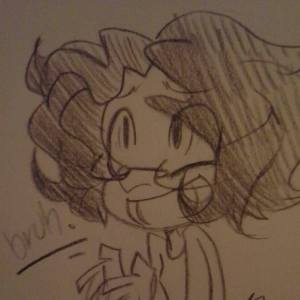 Again, this post isn’t for sympathy. Our family never seeks that. What we do seek is respect, and just to understand because we are different doesn’t mean you should judge. Get to know us as people, and stop the assumptions. The gossiping, and the looks. It gets old.

It’s funny, she’s my 15 year old, and her soul has to be at least 90. She has insight on the world that most 15 year olds never do. An appreciation of music, arts, and the view of other cultures that just blows my mind sometimes. I wish others would get to know her, and be as open mined as she is. To not assume she weird, but just sees things differently than you do.

If we are as an society to live with each other, we have to stop tearing each other down, especially if we are different. Question with sincerity, not assumption or prejudice. One thing we also need to remember, is when we teach our children that it’s ok to assume, stereotype, or gossip, it becomes a learned behavior. One that is passed down from one generation to the next. That if I come to you as a parent telling you, your child is doing damage to another child, fix it. Saying a child is just being a child is just as bad as doing it yourself.

Correction starts at home, embrace the different, don’t be ignorant.