I’m writing this as I watch the reboot of the show.

The show has a special meaning to me, as this was my first real uncomfortable scene I did in college for my Advanced Acting class. Neil Simon was a genius in this play!

It’s about two friends who are two very big opposites, and decide to live together after both of their marriages fall apart. They are going out into the world being single after being with their significant others. When I say opposites, I mean literally opposites.

Tony Randall and Jack Klugman did a fantasic job in 1970 when this show first came to tv. From the credits, it looks like Matthew Perry wanted this to come back to the the tv screen, and so far it looks flipping hilarious.

Perry made Oscar Madison more modern, but still the same character to the basics. One scene, showed Oscar eating a two day old sub off his table. Every essence.

Thomas Lennon plays as Felix Unger, and hits it on the nail! Organixed, and neurotic as hell. It drives Oscar crazy, but makes for some hilarious scenes between the two. 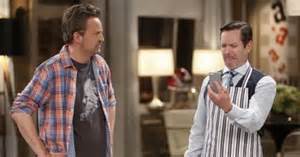 The pilot acts out the scene I did in college, so I’m really critical on how they pull this off. Felix and the new date hit it off. They hit it on point. Sometimes when plays or books made into tv series, things get cut, and it doesn’t have the same appeal.

This show picks up where the comedic genius left off. Of course, in my bias opinion, I’ll say go see the play in person, but if you can’t watch this show! Casting is excellent. Humor is timed very well, and they didn’t steer too much away from the original premise. Though is a little more for the modern era, it fits. I definietly will be watching on Thursdays. It is only two shows in, but from my take of the play, it meant to have fun while these two are finding their way after divorces. Not complicated, and I like my TV like that, especially if it’s comedy.

I’ll give it 8.5 horns out of 10. If you watched the show in the 70s and now, you’ll get the reference. They kept the basics. I would get rid of some of Oscar’s Behavior, and Felix’s bad nerves, but it makes the show work. Again, it just started, so I’ll give it time, and may revisit the rating. Overall, it’s a great remake!