It’s funny how I come up with ideas for things, but my mind is working constantly. As I writ this, I’m thinking of dinner tomorrow, and wanting to get back into writing my fanfiction.

Yes, I write fanfiction as a guilty pleasure, that’s another blog post.

This creation came out of a conversation my brother and I had about three days ago. We bought a dessert wine a while back, because again, I like to try new things and see what they taste like. After I saw his face, I said I’d pass. It wasn’t nasty though. It was a really sweet creamy dessert wine. Too sweet.

As I wrote on before, I love cooking with wine, because you can manipulate it into whatever you are going for, as long as you pick the right wine. I have never baked with it……until now.

“You know what, I’ll bake it into something”.

Thumbs up all around, and now I was on a mission! How do I bake this wine? What do I pair it with? Well over here at CSM, we are semi-homemade for a reason. First, I don’t have the budget to make everything from scratch. I’m not ashamed of it either. If I bought like that, the crew and I couldn’t enjoy other things, and they get that. 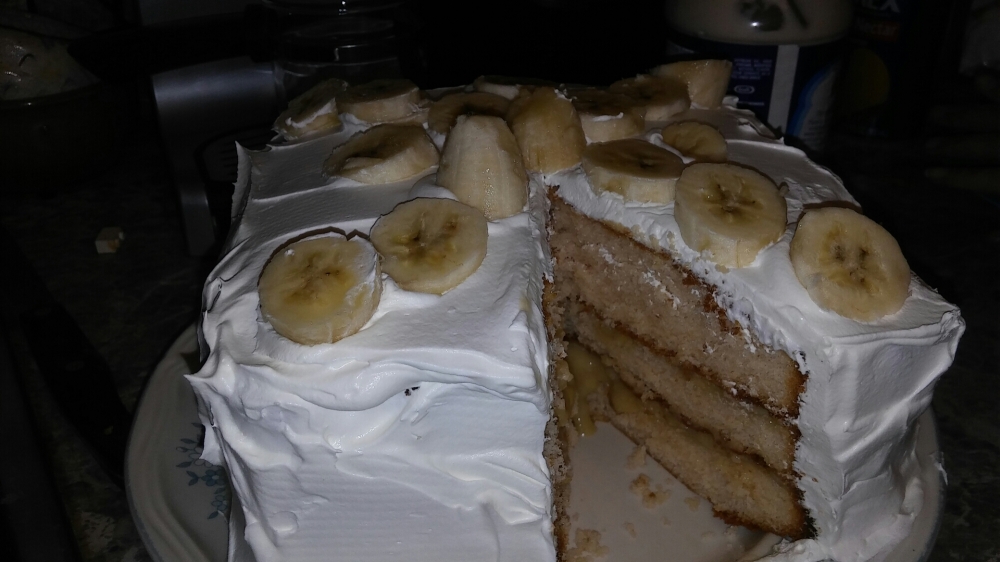 Anywho, I thought cake! It was a strawberry wine, so why not bananas?!

I bought a cake mix, french vanilla, because I’m staying with my mom right now, and I don’t exactly have the space to get all up in the dish.  Going according to the instructions, it was easy, except I threw a swerve…….wait for it…….the wine!

I used it in place of the water! What! Yes! Again, alcohol isn’t lethal when cooked or baked. Leaving the strawberry taste. It gave the cake a pound cake moist feel. Cheat code in baking! It’s like the super genie you attached to your nintendo back in the day. I’m old, shut ya face! LOL!

I bought two mixes, which meant doubling the instructions. I also bought three cake pans. Making this a three tier cake. Oh. Snap. Yes! Dividing the mix into three pans, I baked according tot he instructions. After they were done, they sat overnight to cool.

Meanwhile, I made a banana buttercream spread for the layers. Really easy to do, and not too costly, but does take time and patience. I made this, and refrigerated the mix over night to cool. The recipe is below.

Of course it must be put in the refrigerator. I can’t stress that enough. No blaming me for food poisioning! Use the buttercream recipe and let me know what you think! I’m going to grab a slice of cake(knowing I shouldn’t, but man it looks so good).