As promised, I said I was going to document thanksgiving for you guys, and I am! In my house it has more special meaning, because sometimes my birthday falls on the day, and five days later, my grandfather’s birthday, so we kinda celebrate all three within the week. Nothing different this year, except my grandfather’s health. Not the man I grew up with but, he’s still here.

So we get to my grandparents house around midnight Tuesday. That next morning was errands for days! We finally get around getting the rest of the supplies for dinner.

Sam’s Club, and Giant Eagle. Wednesday night around 6 pm. Not ever again. It. Was. PACKED! I wanted to kick my mom for that one. So tired, we broke tradition of card playing, music going, and baking the night before. Everything was made the day of. HUGE NO NO. Came out ok, but I hated that.

I got up early, and was ready to go. What I forgot, was everyone else was still sleep. LOL. It let me plan on how I was going to cook everything, with limited pots and pans, different tastes, and small amount of space. Not to toot my own horn, but Martha Stewart, Rachael Ray, and Paula Deen have nothing on me. WOOT WOOT.

I remembered the turkey was only 14 pounds. LOL. Grandma thought it was 20 pounds but couldn’t see it correctly, but you guys remember our motto here, we roll with it. Meant it could go in later. I began on the sides, once I figured out my pan situation. I made two different dressings. My traditional one I made is more of the sweet and tangy side. Apples, cranberries, onions, and celery. Since the kids hate onions and sautéed celery, I left them out, and sautéed the rest and mixed the pre-bagged dressing(yes I buy pre-bagged cornbread. Remember semi-homemade) with cran-apple juice. Yes, it seems sweet, but really blended well. I then moved on to my veggie themed dressing. Made the same way, but with herb seasoned cornbread. I then sautéed zucchini, butternut squash, onions, and celery. Added vegetable stock, and boom, we got it together.

Moving on to the family yams. These yams are family tradition. Yams, butter, brown sugar, and marshmallows. Normally I hate marshmallows, but in this case, and rice krispie treats, they are awesome! Threw that together, and kept it moving. 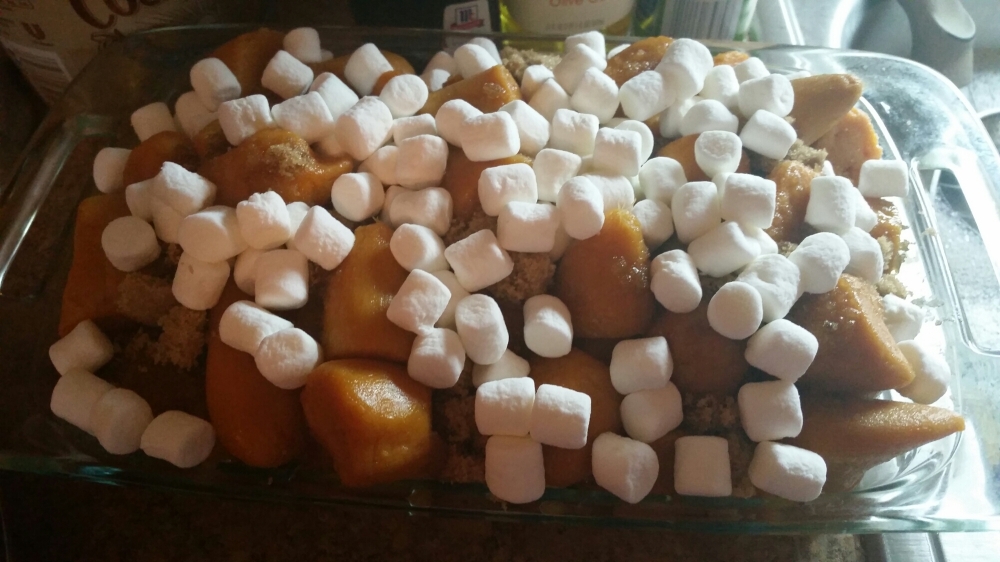 We move to my homemade macaroni and cheese. This too, is a family recipe tradition. Making the cheese sauce from scratch, with seasoning as simple as just salt and pepper. I made the pasta the night before, so it was easy to mix together, and topped it with more cheese, because my kids are secretly rats, and we put that in the oven. 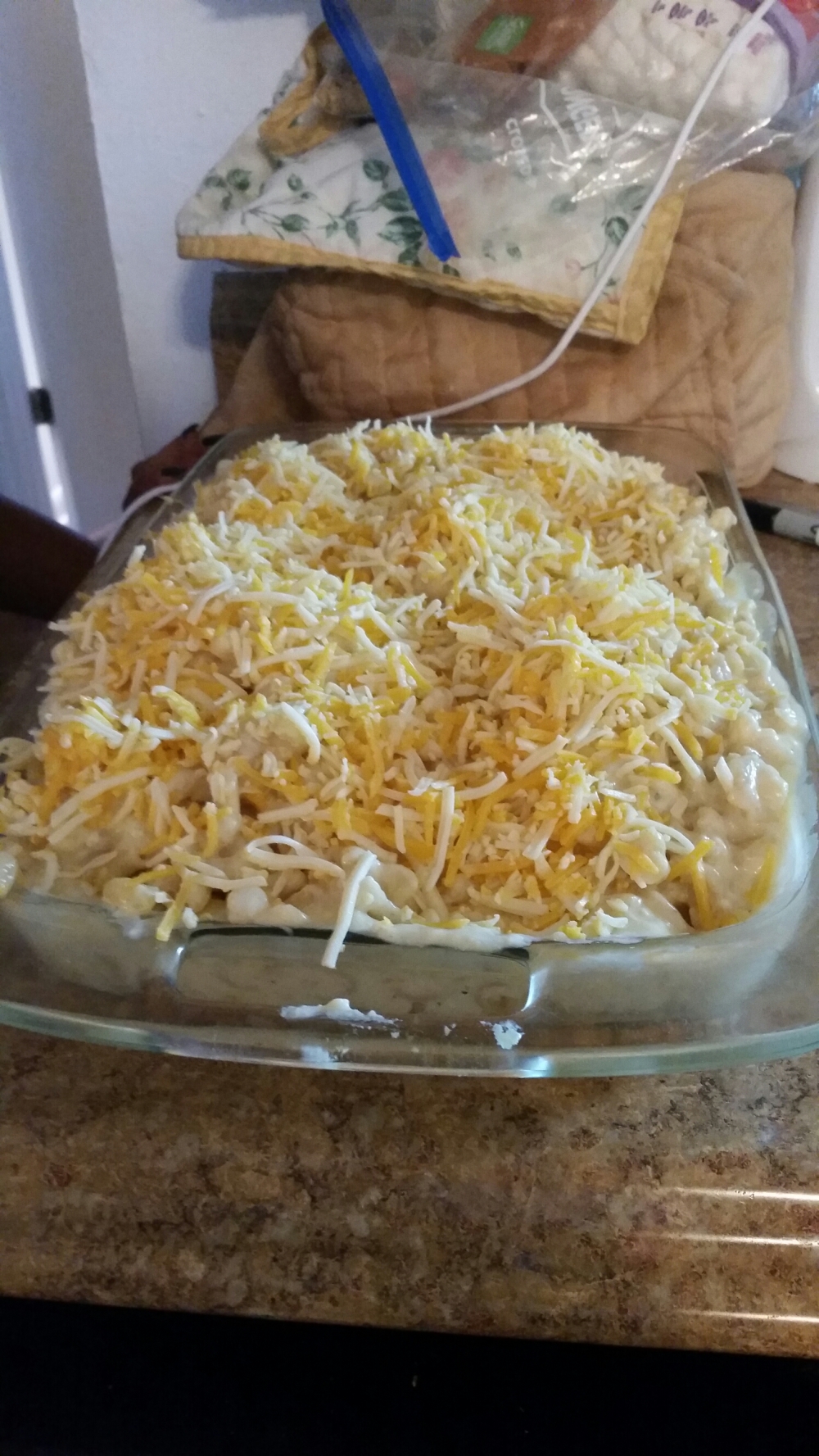 The turkey was small, we bought chicken legs to stretch out the dinner. My grandfather was having some stomach issues as well, so it let him still enjoy the holiday without missing out. We flavored the turkey with garlic salt, pepper, butter, and………wait for it……..apples and honey, inside the bird. It made the turkey juicy and soft.

Greens were done and frozen, so we just reheated those. We got the mac n cheese, yams, dressings all ready to go. We boiled the potatoes for the pies, made the gravy, and then at this point cooked the turkey and chicken going. Moving on to desserts!

Now, we normally turn on George Clinton, or any 70s funk, dance around and make multiple sweet potato pies. My mom’s record I believe is 30 pies in one night. Now, for a baker, that’s probably nothing, but for someone who is just making them to have, that’s awesome. We didn’t have as much room, or funds this year, so we went with…….wait for it………mini sweet potato pies! They we so cute! I may keep it around because of the less mess with my kids. We also made pumpkin cheesecake.

I recommend to make it from scratch. Jello no bake cheesecake is good, but it didn’t take the way I wanted it to, but it was still good. Lastly, we finally made pecan pie from scratch. Never made it before. Not to bad to do actually. All came out very tasty!

We wrapped it all up and served it. I was nervous because I never really cooked for my grandparents on thanksgiving. Remember, I’m an outside the box kind of gal. Shockingly enough, it was a hit! Everyone loved it! 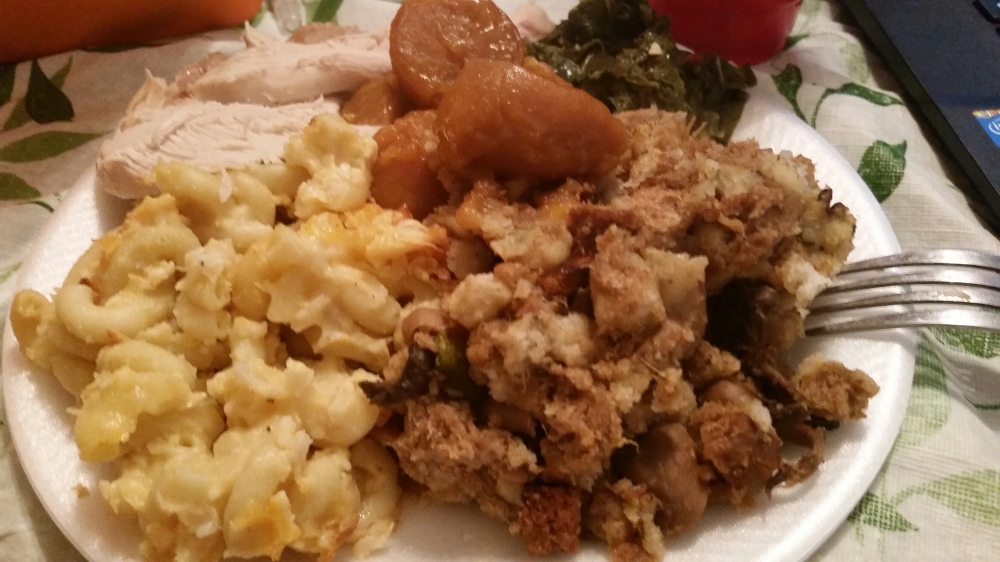 Once the turkey cooled, my mom was on strike. She has her recipe, turkey salad, that was awesome! It’s a kid favorite of mine, and any time I make it, it comes out wrong. Guess it’s a mom recipe. I told her, ‘once the restaurant is open, you’re going to make this in big batches once a week’. I got my desserts, mom’s turkey salad, my grandmother’s spaghetti, and her burgers and fries. It was a good birthday week.

Despite some issues, we had a great thanksgiving. It’s where I get the theory that food tends to mend fences, and bring people together. If we can do it, so can a lot of people. Hope you all had a great holiday!